Comparison of Hypoglycemic and Antioxidant Activities of the Compounds Isolated from Ficus hispida Linn. and Ficus pomifera Wall


Background: Traditional knowledge has been a legacy of the past to the present. Barks of Ficus hispida Linn. and leaves of Ficus pomifera Wall. (Moraceae) have been used traditionally for the treatment of diabetes in North-east India and many other places. As many drugs have been developed from traditional plants, the authors have taken up the plants for the study of hypoglycemic activity.

Objective: To investigate the hypoglycemic activities of the triterpenoids isolated from the plants and their antioxidant activities.

Results: The biochemicals and trace elements were present in appreciable amounts. Triterpenoids, (1-5), from F. pomifera and 19-hydroxyphlogacantholide (6), 3-O-[ß-D-glucopyranosyl-(1’→2’)-α- L-rhamnopyranosyl-phlogacanthoside] (7) and galanolactone (8) along with stigmasterol (9), stigmasta- 5,22-dien-7-on-3ß-ol (10), 5-(decahydro-1,1,4a-trimethyl-6-methylene-5-yl)-3-methylpent-2- enal (11), stigmasterol glucoside (12) and stigmast-4-en-3-one (13) from F. hispida Linn., respectively, were isolated. The different extracts of the barks and leaves of these plants along with the isolated compounds had antioxidant and hyploglycemic activities. 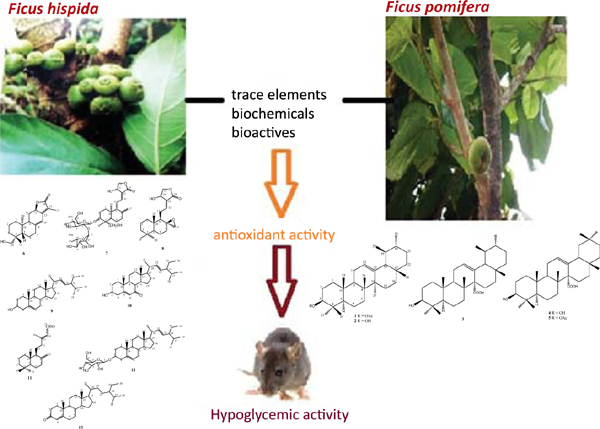