Tecoma stans (L.) Juss. ex Kunth has shown potent antidiabetic effect in the past; however, none of the studies have been carried out to explore its effect in diabetic complications including diabetic retinopathy and nephropathy. Thus, this review will aim to explore and propose multiple hypotheses regarding its mechanism of action in diabetic complications which includes reduction in oxidative stress, inflammation, angiogenesis, lipid profile correction and direct anti-glycemic effects.

A detailed review including most of the articles, which includes research as well as reviews, available on the internet regarding the concerned topic was performed. The review includes MEDLINE databases using keywords along with their combinations, such as diabetic complications, plants in diabetes, Tecoma stans, renin oxidative stress, inflammation, angiogenesis, diabetic retinopathy, α- glucosidase and α-amylase, among several others. Mostly English-language articles were selected. 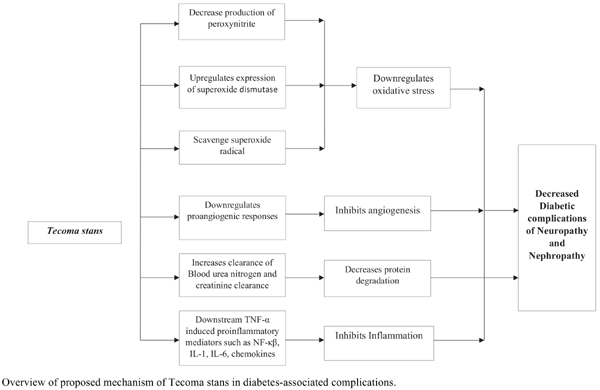