Background: The therapeutic effects of a number of natural products on Inflammatory Bowel Disease (IBD) have recently been examined in detail. The whole herb and roots of Angelica keiskei (Umblliferae) have traditionally been used as a diuretic, to treat gastrointestinal diseases such as gastric ulcers and diarrhea in Japan.

Objectives: The present study was performed to investigate the effects of xanthoangelol, a major chalcone of Angelica keiskei roots, on diarrhea and inflammation in the large intestine of IBD model mice.

Conclusion: Xanthoangelol reduced DSS-induced increases in colonic IL-1β, TNF-α, and MCP-1 levels and prevented eosinophil infiltration, which supports its potential as a treatment for IBD. 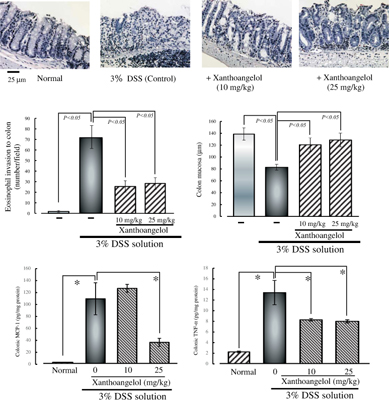