Background & Objective: Barley is widely used as a major staple of human food and animal feed. Several antioxidant phenols are found in barely, which have scavenging properties. The present study aimed to assess the protective effects of barley seed against the oxidative damage of brain tissues in a scopolamine-induced memory impairment model.

Results: Compared to the scopolamine group, barley seed could decrease the escape latency time in the treated rats, while the time spent and distance traveled in the target quadrant on the probe trial increased. Moreover, barley seed could increase the malondialdehyde concentration in the hippocampus and cortical tissues, while the thiol content was observed to decrease.

Conclusion: According to the results, the use of dietary barley seed could improve the memory function in dementia associated with increased oxidative stress. 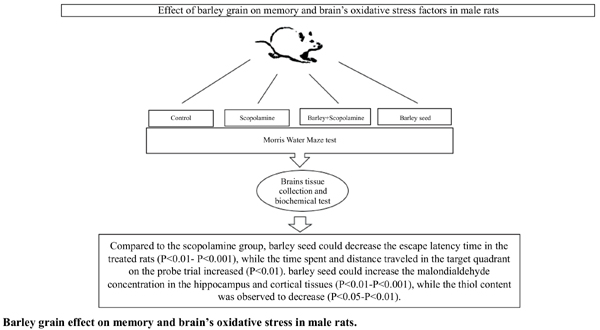